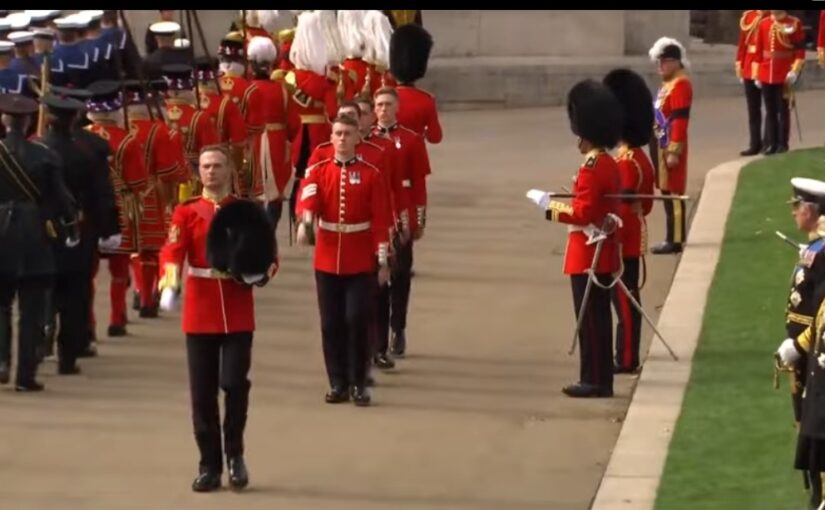 Today my wife and I spent almost the entire day glued to the BBC’s coverage of Queen Elizabeth’s funeral, the procession from Westminster Hall to Westminster Abbey, the funeral service itself in the Abbey with hundreds of heads of state and other world leaders among the congregation whom Archbishop Justin Welby reminded that those who serve others “will be loved and remembered when those who cling to power and privileges are long forgotten,” then the interminable procession from the Abbey via Buckingham Palace to Wellington Arch  near Hyde Park Corner, and finally by Royal Hearse to Windsor, where the committal service took place in St. George’s Chapel, where the Queen and her late husband Prince Philip will be buried side by side.

The whole thing went off without any mishaps, and I was very impressed by the crowds, both those lining the streets along the procession routes, as well as those gathered in open spaces in Ediburgh, Manchester, and as far away as Christ Church, NZ. Even more impressive were the masses of soldiers and sailors in their colorful uniforms, with their carefully choreographed movements, all to honour their late monarch.

It made me think of what other soldiers are doing at the behest of their leaders, such as those of the Russian army in Ukraine on Vladimir “Butcher” Putin’s orders: attacking a neighbouring country on the pretext of a threat by NATO and “Nazis” in Ukraine’s government, then bombing civilian targets such as schools and hospitals, torturing, raping, and killing civilians including children, and threatening the continent with a major disaster by repeatedly shelling the area around Europe’s largest nuclear power plant.

I thought also of the Ukrainian soldiers defending their country with incredible bravery and ingenuity, and I came to the conclusion:

The impressive spectacle on display in London and Windsor today, and the courageous defense of their country against a vicious and brutal aggressor, is what the military is properly used for. What Putin is doing, ordering an invasion, pillaging, and all sorts of other atrocities, is an improper use, an abuse of the military which he should not get away with but be held accountable by the international community.