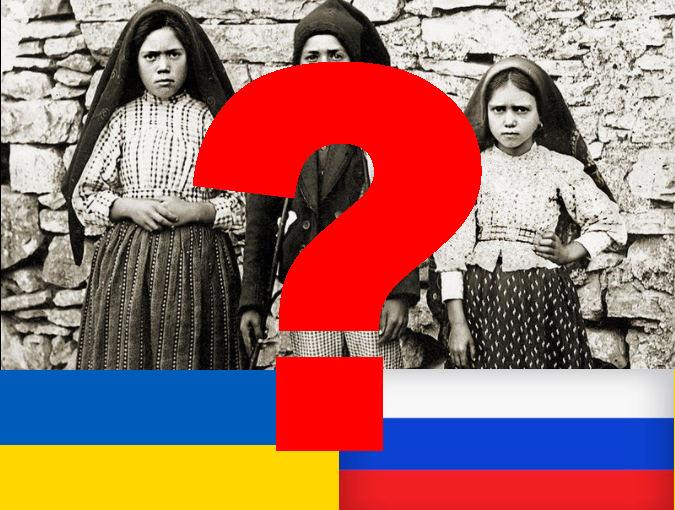 The Catholic News Agency reports that on March 25 Pope Francis will consecrate the Ukraine and Russia to the Immaculate Heart of Mary,  and in another article explains what exactly this means.

In recent decades many Protestant denominations have abandoned, revised or relativized essential aspects of the Christian faith as attested by the Bible. This, together with the emergence of renewal movements within the Catholic Church whose spirituality is very close to that of evangelical Christians, has led to an increasing approachment between the Catholic Church and the Evangelical movement, with the realization that our two traditions can at least both recite the ancient creeds[1] without reservation.

As an Evangelical with Roman-Catholic roots, and with both family and many friends in the Catholic Church this planned act saddens me because it underlines the major disagreements which still divide our traditions.

In view of what the writer of the Letter to the Hebrews says about the cloud of witnesses which surrounds us[2] even as an Evangelical I don’t have too many problems with the notion of asking the saints, i.e. believers who have preceded us in earthly death and whom the Church recommends to us as examples of a faithful Christian life, for their intercession; this does not seem too different to me from the practice common among us Evangelicals of asking for the intercession of believers who still live among us.

But I cannot find any support or justification in Scripture for a piety focussed on the saints which credits them, including the mother of the Lord, with miracles; which considers prayers to the saints more efficacious than prayers to God himself; and I particularly cannot find any justification for consecrating people or countries to anyone other than God himself. As far as I can see this skates perilously close to the line between honoring  exemplary men and women on the one hand, and worshipping God on the other; a line which, when crossed, results in idolatry. And we have not yet even addressed whether the heart of Mary is indeed immaculate (sinless) when Scripture clearly suggests otherwise[3].

I find this planned act all the more regrettable as we have come together during the pandemic to pray across denominational boundaries for our countries, both in Germany (Deutschland betet)) and Austria (Österreich betet gemeinsam), and are just coming to the end of a week of Europe-wide, cross-denominational prayer for peace in Ukraine and Russia (Europe prays together). This act will break this unity: some will commend these two countries to God himself, while others will commend them to the mother of Jesus, as if she were on a par with the Trinity.

And this act suggests something else: that in the Catholic Church the supposed revelation of Mary in Fatima has primacy over the revelation of God in Scripture.