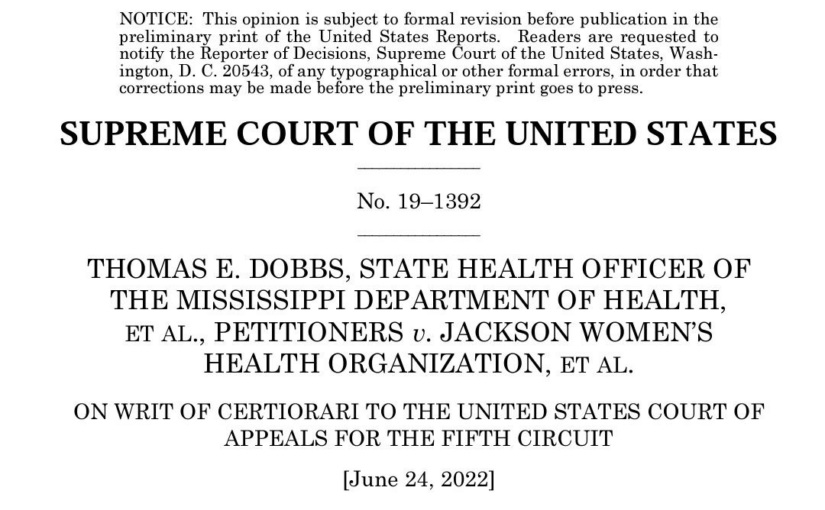 I must confess to being a bit shocked by the reactions to SCOTUS reversing Roe v Wade.

On the one hand there are my conservative Christian friends, both Evangelical and Catholic, who celebrate the court’s decision, in a triumphal tone, seemingly without any awareness of how this will increase and confirm the polarization of the USA; many without recognition that abortion is first a spiritual issue, and only then a legal issue. It is very easy to see abortion primarily as the result of self-indulgent recreational sex and to ignore the desparate situation of thousands, if not millions of women who are in borderline abusive relationships where the man can’t be bothered to take responsibility for either contraception or the baby that may result without it — women who simply cannot afford another baby or cannot cope with another pregnancy. The latter is also why adoption is not a good alternative for many pregnant women: as soon as the baby is born there is instinctive bonding that makes it difficult to give the baby up and for many women results in feelings of guilt; relentless propaganda by the pro-choice side during the past half-century has convinced many women that a baby in the early stages of pregnancy is merely a blob of tissue one doesn’t need to feel guilty about.

I am not an expert in this area, but it seems to me that instead of triumphal celebrations and the feeling that we have arrived at the goal, the challenge for pro-life Christians and their churches is to find good solutions for these desparate situations. This may include making sure that the laws passed by their states do not save the lives of babies at the expense of the lives of mothers but have robust medical exceptions; ramping up existing programs which provide material assistance to pregnant women, and legal initiatives to hold fathers accountable for their offspring, with compulsory paternity tests if necessary.

On the other hand I am astonished at the hysterical reaction of the pro-choice side to this reversal of Roe v. Wade; this includes most of the media, not just in the US but in Europe etc as well. SCOTUS argues pretty convincingly that the US constitution not only contains no explicit right to abortion but that contemporary jurisprudence didn’t assume an implicit right to abortion, certainly not after “quickening”, i.e. when a fetal heartbeat can be detected.

In view of that fact Roe v. Wade invented a right to abortion; all the current court did was to return this issue to the legislatures, which is where laws are supposed to be made in a democracy.

The hysterical reaction also demonstrates total oblivion to the fact that a human fetus is a human being, and therefore is entitled to the protection of the law; making that dependent on viability independent of the mother would take us down a very sinister path because human beings at all stages of life can become so dependent on another that they are no longer independently viable, and I hope no-one other than Peter Singer suggests “aborting” them.

And finally, the hysterical reaction demonstrates a marked lack of confidence in the democratic processes and institutions — or else a very UNdemocratic unwillingness to accept the will of the majority.

The challenge for the pro-choice side, instead of this hysteria, is to engage in the political and legislative processes to achieve their goals; to persuade enough of their fellow citizens of their point of view to pass legislation they can live with (should not be too difficult since they always claim that the majority of Americans want abortion to be legal); and finally, to redouble any efforts designed to give pregnant women such good alternatives that abortions become unnecessary.