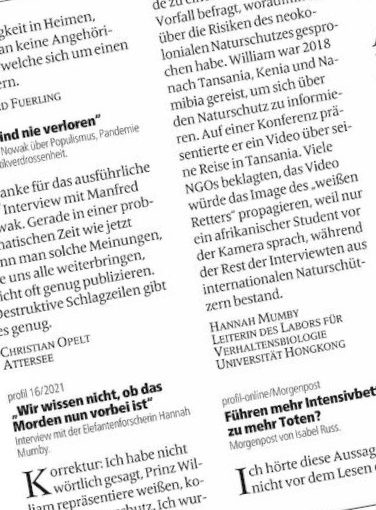 In a letter to the editor published in profil 18/2021 biologist and elephant researcher Dr Hannah Mumby from the University of Hong Kong writes,

“In 2018 Prince William travelled to Tanzania, Kenia, and Namibia to learn about conservation. At a conferenc he presented a video about his trip to Tanzania. Many NGOs criticized that the video was promoting a  “white saviour” image, because only one African, a student, spoke in front of the camera while the remaining interviewees were international conservationists.”

I assume that the video which Prince William presented reflected his trip to Tanzania: what he experienced, who he talked to, etc. It should not be too surprising to anyone that a politically prominent figure like the Prince primarily encounters carefully selected people on a trip like this; people who are judged by the security teams (both his own and those of the host country) to be harmless and unlikely to be a danger. That this selection criterion results primarily in prominent experts and activists, and that these, for any number of reasons tend to be mostly white Americans and Europeans, does not surprise me either.

I am also not surprised (because this phenomon is not new) but rather irritated that activists and propagandists (and I use these terms without any negative connotation) have the tendency to consider everything someone says propaganda, or to dig through it for things that could be interpreted as propaganda.

Most of us normal folks (and I assume that this applies to Prince William as well) are not constantly in propaganda mode when we comment on something; much of the time we simply report, without value judgments, on what we have experienced; we are not at all concerned with how others could interpret what we say as propaganda or promotion of this or that.

And so I also assume that Prince William travelled to Africa to express his interest in conservation and to support various conservation initiatives; that he presented his video for these same reason, without worrying overmuch about who he had talked to or interviewed. I am pretty sure that he was not seeking to make some political statement about the ethnic or national identity of the conservationists he spoke to. If “many NGOs” wish to interpret his video that way, then it is because they assume that everyone else thinks in the same categories and patterns as they themselves — and that’s pretty naïve and stupid.