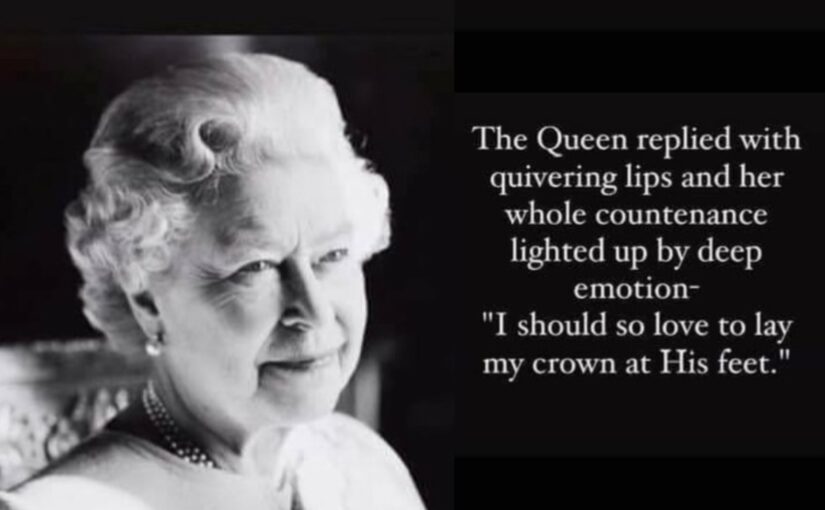 Is being concerned about truth part of “international,  cynical deconstruction of hope ”?

As Christians, are we about truth, or about touching stories, even when they are untrue or inaccurate?

Can we really give people hope with “fake news”?

Is a concern for truth and accuracy in Christians’ communications evidence of an “international, cynical deconstruction of hope”?

In the wake of Queen Elizabeth’s death a Facebook user[1] posted this meme:[2] 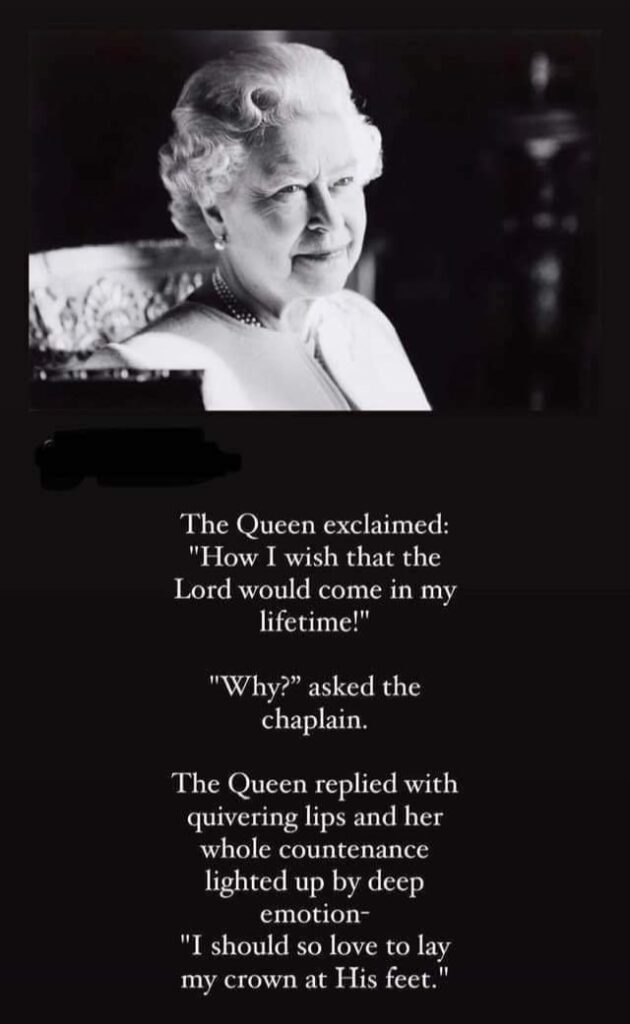 This struck me as strange, not because of the pious sentiment it expressed (for the Queen has always been a pious Christian who was not shy about expressing her faith), but because the diction (the tone, the choice of words) was not that of an upper-class Englishwoman of the second half of the 20th century who was a member of the Church of England. It just didn’t sound like Queen Elizabeth II.

So I googled the key phrase, “I should so love to lay my crown at His feet” and was not very surprised to find that, with the exception of the first few results, all of which had been posted in the few days since the Queen died, practically all others attributed the quote to Queen Victoria, Queen Elizabeth’s great-great-grandmother. One of the results, a facsimile reproduction of the April 1919 issue of “The King’s Business”[3], even identified the person with whom Queen Victoria had this conversation: it was Dr. Frederic Farrar, Dean of Canterbury Cathedral and a gifted preacher: 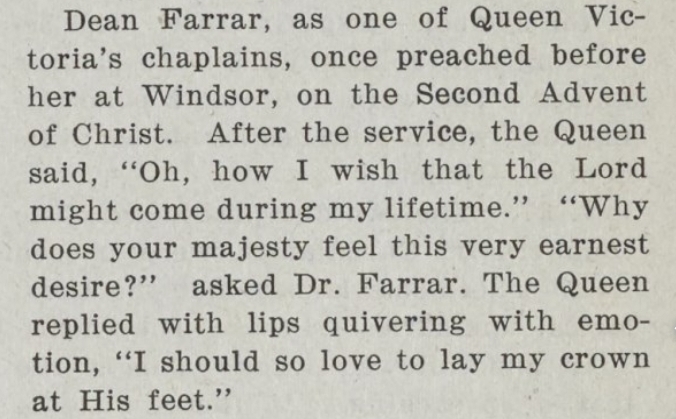 I was evidently not the only one who realized that this quote was wrongly attributed to Queen Elizabeth, because several commenters on this post pointed out that this moving story talks about Queen Victoria, not Queen Elizabeth; most of the hundreds of other commenters chose to ignore this inconvenient fact and gushed about how this quote demonstrates Queen Elizabeth’s Christian faith.

And dozens of people, no doubt well-meaning Christians all and including respected friends of mine, have since shared this post, evidently all without fact-checking it.

Pointing this out on some friends’ timeline, who had shared the post, elicited comments like, “So what? It’s still a lovely quote!”, or “I make no apology for posting this!”, or “I don’t find it egregious!”

One person justified sharing the post with the fact that it might give people hope in this time of international mourning; he then suggested that my concern for accuracy is part of “international cynicism” and the “cynical deconstruction of hope.”

This lack of concern for truth (and actual dissing of such a concern as cynical) discredits the faith it is supposed to demonstrate; it lends credibility to comments like this one:

Simply put, as told in this context, even without naming Queen Elizabeth but with her picture attached to it, the story just isn’ t true; and attributed to someone living during the second half of the 20th century and the beginning of the 21st it does indeed “reek of souvenir teacups and bobblehead sentiment.”

As Christians we are supposed to be about truth. Yet so often “does it feel good” seems to be more important than “is it true“, not just here on social media but also in too many pastors’ sermon illustrations and even personal testimonies of conversion and healing.[4]

As I said, Queen Elizabeth was not shy about her Christian faith, and there is plenty of evidence of that in her speeches, as Terry Mattingly documents in his article entitled “Elizabeth the Great: Why do many journalists choose to edit faith out of her Christmas talks?”. To his question  I would like to add the equally pertinent question, “Why do many Christians believe that it’s o.k. to embellish the truth as long as that makes a nice story?“