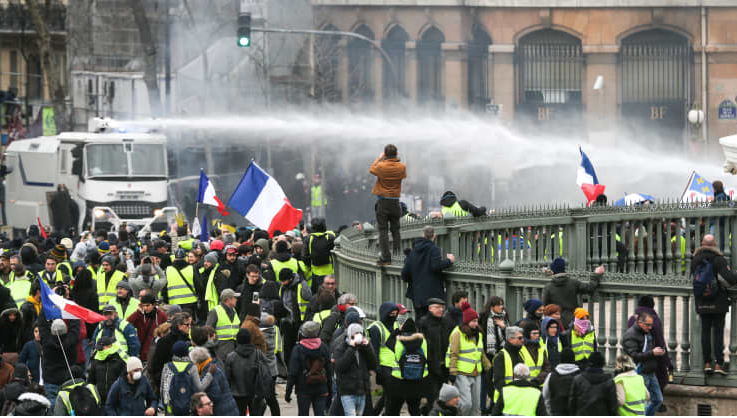 «What is wrong with France, a wonderful country relentlessly let down by its politicians? There is an unmistakable whiff of panic in the Parisian air, a growing sense among sections of the ruling class that France, riven by culture wars, its economy and society in never-ending decline, its housing estates in the banlieues permanently on the brink, is nearing a tipping point.

For all the sneers, Boris Johnson’s latest electoral triumph did not go unnoticed. What, the more far-sighted intellos ask themselves, will be France’s equivalent of Brexit, if, or rather when, it finally comes? Will it be another 1961 (a failed putsch), 1968 (hard-Left student insurrection), 1981 (communists in government), 1789 (proper revolution) or, hopefully, something milder, more constructive?

The gilets jaunes two years ago were a false alarm, but how will the rage of la France profonde manifest itself next time? Emmanuel Macron has admitted that “Leave” would win a vote on Frexit, though nobody will want to risk one. It’s a great shame: France, the country in which I grew up, needs a cathartic reset like Brexit, a political earthquake that is neither hard-Left nor hard-Right but which finally empowers the culturally conservative majority.»

Here are my non-expert thoughts on this:

The problem is that, increasingly, even the “moderate left” view themselves as the elite, superior to cultural conservatives whom they view as “hard-Right”[1]. Therefore they will not easily countenance anything that empowers these “deplorables“, to use Hillary Clinton‘s deplorable diction. This is true not just in France but all over the West.

It will be interesting to see how things continue in the UK. As much as I regret Brexit, it seems to have brought about or at least started just such a “reset”. But while these larger countries (Britain, France, even Germany) might go through a Brexit or Frexit or Gexit without too much damage to their economies, for all the EU’s shortcomings leaving it, or its complete break-up, would have disastrous consequences for smaller countries and even Italy or Spain. Among other things it would mean the total domination of our economies by the US and China, without any counterbalance.