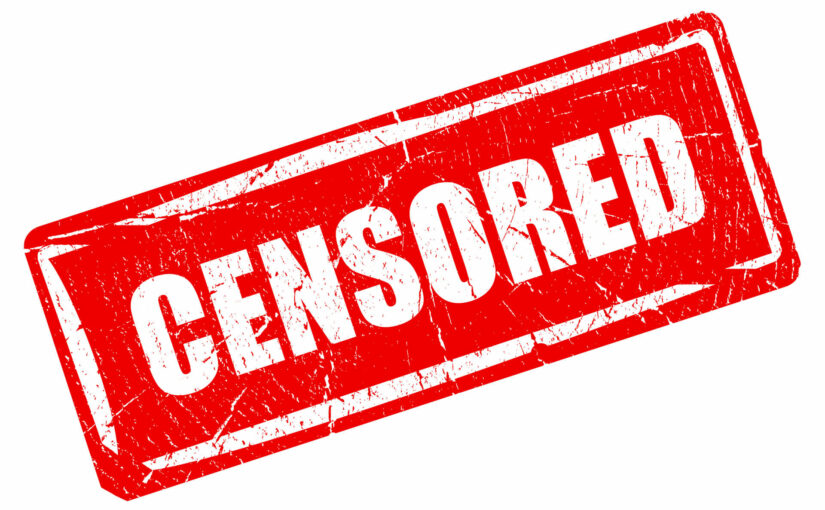 Every now and then, accusations of censorship are tossed around, recently with regard to a video clip from a John McArthur sermon on “biblical sexuality”, and currently with regard to several prominent artists removing their material from Spotify over the presence of the “Joe Rogan Experience” podcast on the streaming service.

But what is censorship? Here is the introductory paragraphs from the Wikipedia entry:

Censorship is the suppression of speech, public communication, or other information. This may be done on the basis that such material is considered objectionable, harmful, sensitive, or “inconvenient”. Censorship can be conducted by governments, private institutions and other controlling bodies.

Governments and private organizations may engage in censorship. Other groups or institutions may propose and petition for censorship. When an individual such as an author or other creator engages in censorship of his or her own works or speech, it is referred to as self-censorship. General censorship occurs in a variety of different media, including speech, books, music, films, and other arts, the press, radio, television, and the Internet for a variety of claimed reasons including national security, to control obscenity, child pornography, and hate speech, to protect children or other vulnerable groups, to promote or restrict political or religious views, and to prevent slander and libel.

Direct censorship may or may not be legal, depending on the type, location, and content. Many countries provide strong protections against censorship by law, but none of these protections are absolute and frequently a claim of necessity to balance conflicting rights is made, in order to determine what could and could not be censored. There are no laws against self-censorship.

That is a good starting point because it points out that censorship is not always illegitimate. Typically, in our Western democracies, constitutional guarantees of freedom of speech and expression impose limits on government censorship, with exceptions, but private individuals and organizations typically have more freedom to suppress unwelcome speech and expressions. Thus, while the government may not prohibit a poster proclaiming, “God is not real”, the private owner of a billboard is not required to allow this poster to be put up on his billboard; while the government may not prohibit someone from talking to people about his atheism, you are not required to invite that person into your home and allow them to talk to your family or guests about his atheism. Nor is a church required to allow this atheist to preach his views from their pulpit, or to allow anything at all which contradicts their doctrines to be preached from their pulpit.

When it comes to YouTube removing material from its site, such as a John McArthur clip proclaiming, “‘There is no such thing as transgender. You are either XX or XY. That’s it.”, the big question is, to what extent is YouTube a public space? The same thing is true of Facebook, Twitter, Instagram, etc. These are, after all, private companies, huge though they are, and their platforms correspond to private venues. Additionally, when you sign up to put content on these platforms you typically have to agree to their Terms and Conditions which usually incorporate content guidelines. If their content guidelines prohibit “hate speech”, and their definition of “hate speech” includes the denial of the reality of transgender, or the denial of the legitimacy of various sexual orientations, or the denial of same-sex marriage, then they are fully within their right to remove content that contravenes their guidelines.  And this is not really censorship, because they are not suppressing your right to speak or express your opinions, they simply refuse to provide a venue for certain types of speech. It’s the same as your church prohibiting someone preaching atheism or Buddhism or Islam in their sanctuary.

In the matter of artists removing their materials from Spotify because they disagree with Joe Rogan’s speech in his podcast hosted on the streaming service, the argument is somewhat different. Those who accuse the artists of censorship do so because in their view the artists are are trying to persuade Spotify to censor Joe Rogan. That may well be what they are trying to do, but I would say that  there are a number of reasons which make it perfectly legitimate for these artists to want to leave Spotify, and the economic reality is that their decision will not sway Spotify anyway:

I believe that we simply have to live with the fact that Google, YouTube, Facebook, Spotify etc., are private, secular organizations whose management is dominated by people who are not favorable to the Christian faith (or most other faiths, for that matter), and who are motivated primarily by money. They tolerate Christian content to the extent that it does not offend their own views too much, or is unlikely to get them into trouble with influentual segments of their clientel, or makes enough money for them. The same is true with regard to Joe Rogan and other contriversial podcasters: what motivates them is the money they hope to make by hosting these podcasts. But they have no commitment to freedom of speech and expression on their platform, and our legal systems do not require them to have such a commitment. Add to that the fact that most of us, both content providers and content consumers, use the services provided by these companies without a paid contract, and the reality is simply that they have no obligation to us.