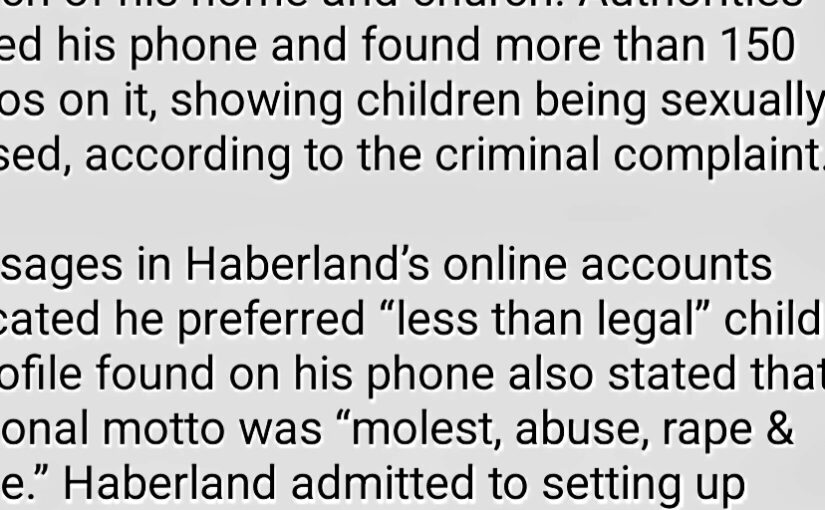 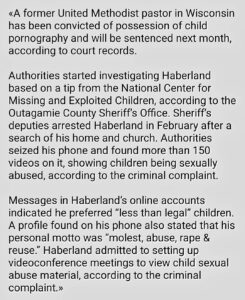 The recent rash of scandals being reported of pastors and youth leaders engaging in illicit sexual affairs with parishioners has been shocking, on the one hand, but on the other hand I could see myself, at several stages of my life, succumbing to similar temptations, and even hiding that sin from others while carrying on ministry. We humans are very good at rationalizing away the sinfulness of our hearts and behaviour, and most of the time we present our carefully constructed “glittering image” [1] to others around us and especially to the church.

I have a lot more trouble understanding the temptation to engage in sex with children (pedophilia) or adolescents (ephebophilia); but I am sure those who are tempted that way and succumb are also good at telling themselves that there is nothing wrong to giving in to these “natural impulses”.

This sad case, however, really has me scratching my head. I do not understand how anyone can tell themselves that wishing to “molest, abuse, rape & reuse” children (or anyone, for that matter) is not sinful and disqualifying from Christian ministry; I do not understand how this man could stand up on Sunday  morning and preach from Scripture, perhaps with his notes and a Bible app on the same phone where he had more than 150 videos of children being “molested, abused, raped & reused”. My own “glittering image” would not survive this, it would shatter if I had even one such image or video on my phone together with Bible, Lectionary, Prayer Book and Catechism and Hymnal, not to mention my Kindle library of pious and theological books.

This man has harmed not only his victims; his family and his church must be be absolutely devastated, and the testimony of Christ has been damaged.

When we are in a close accountability relationship with a mature Christian it is not easy to maintain our “glittering image” without this accountability partner sooner or later noticing cracks in that image; tragically, too many pastors have no such relationship; they are not sufficiently close to anyone who could notice the cracks in their “glittering image” when they succumb to whatever their particular temptation is, and call them on it.

I know I should pray for this man, not just for his victims, his family, and his church. I don’t really know how to pray except to say, “Lord, have mercy!”