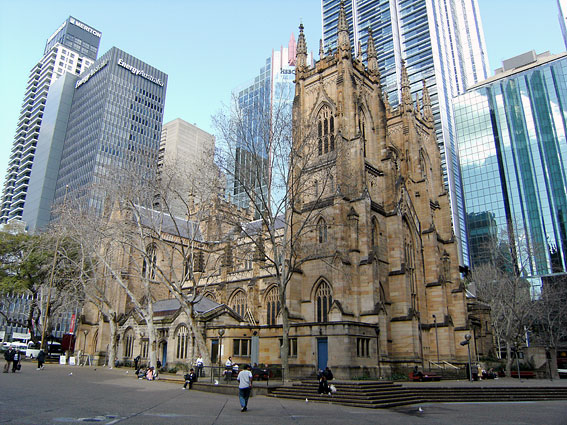 The Anglican Diocese of Sydney, predominantly low church and Evangelical, has just elected a new archbishop after the retirement of Glenn Davies in March of this year. The new archbishop is Kanishka Raffel, dean of St. Andrews Cathedral in Sydney, born in London to Sri Lankan parents and a convert from Buddhism.

In an article for the Religion & Ethics Portal of the Australian Broadcasting Corporation, Dr. Michael P. Jensen, Rector at St. Mark’s in Darling Point, examines the challenges facing the Sydney Diocese and Archbishop-elect Raffel, and while some aspects of the article are specific to SydneyAnglicans, much of it is challenging food for though for Evangelical churches everywhere.

A speaker at the election synod compared Sydney Anglicans with the Ever Given, the oil tanker stuck in the Suez canal recently. The author takes up this image and describes four temptations facing an organization stuck in this way.  All four seem applicable to almost any Evangelical church in the societal and cultural climate we find ourselves in, across most of the “Western” world, but the first one especially resonated with me:

The temptation to appoint a “crash-through” leader.

Anxious people want superhero leaders who will fix everything. They dream of the alpha individual who just crashes through the barriers to change and growth, firing and hiring at will. We want the guy who will build the wall and make us great again. (Sound familiar?) The church is no different. We yearn for a radical change agent. And yet, the problem with the crash-through leader is … well, the crash. They will likely prove polarising and destructive.

To me, the problem with this temptation is that it ignores the truth that the primary change agent in the church, more radical than any human leader, is the Holy Spirit.

Another quote from the article which struck me is this, in the author’s outline of the tasks facing the new archbishop:

But there must also be a courageous and prophetic engagement with post-Christian culture. The great Swiss theologian Karl Barth once said that sermons should be written with the Bible in one hand and the newspaper in the other. The Bible gives us eyes to see what is really in the newspaper. But it is also the case that news may help us to see better what is in the Bible. The mistake that many American evangelicals have made is to imagine that political and cultural means are the way to pursue or to defend the kingdom of God — mostly in alignment with the political right. That is a fool’s errand. It leads to an idolatry of political power, as was seen the Trump’s presidency. It shows no faith in the ultimate Lordship of Jesus, who is the church’s only Lord.

But neither should the church simply follow the spirit of the age. Its calling is not to provide a chaplaincy to contemporary narcissism. It finds laughable talk of “getting with the times” or “history being on our side”. It does not pursue relevance, as if that were anything worthwhile. It outlasted Rome: it will surely outlast Atlassian.

I have highlighted the sentence which made this stand out to me, and I hasten to add that this is not a uniquely American problem, although American Evangelical support for President Trump made it very visible. This problem rears its head every time Christians look to politics to enforce Christian morality on a secular society, and especially when they prioritize one point of Christian morality over everything else. There is, for example, a tendency to make the question of abortion or the whole gender and alternative sexualities question a priority over the treatment of refugees and immigrants, something I have observed both in the American situation during the past few years and in my own country of Austria.

I like the conclusion that Dr. Jensen comes to after talking about the four temptations:

And this, of course, applies to Christians, of every stripe, not just in Sydney or Australia, but everywhere: here in Austria, in England, in America, and wherever the Church is found.