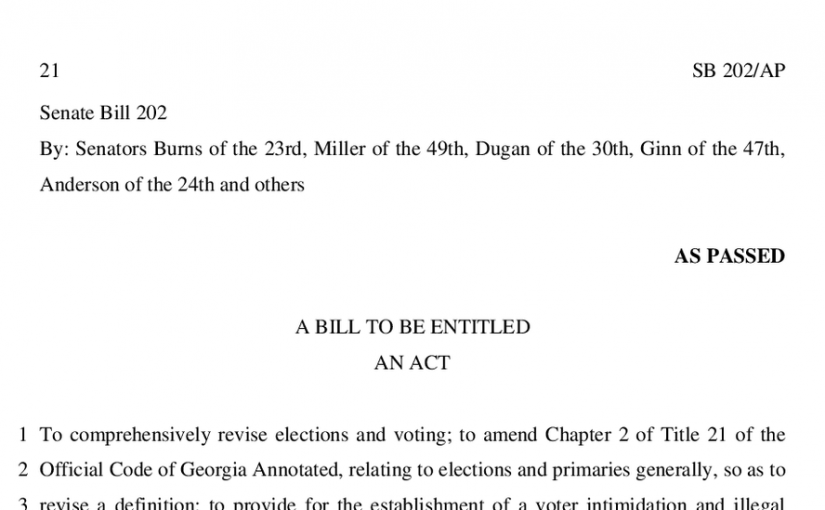 Critics of Georgia’s new Election Integrity Act are vocal and loud and outraged, while those who defend it sound whining and petulant.
I have read analyses (i.e. here) which suggest that contrary to expectations on one side and fears on the other the provisions of the act will make little difference to election results. If so, both the act itself and the outraged reactions to it are little more than attempts at virtue signalling, with the usual differences of opinion on what constitutes virtue.
Nevertheless one does wonder about the intentions behind it. It seems to address problems that exist primarily in the minds of those who believe that the Nov 2020 election was “stolen”, a claim that has been thoroughly debunked by the courts (including those with Trump-nominated judges) and by officials of both parties.
It is hard to impossible to argue for the legitimacy of provisions like the ban on providing food and water to those waiting in line to vote.
When the legislature reacts to criticism of the act by attempting to punish critics by revoking tax benefits this does nothing to dispel doubts and misgivings. It is just as inappropriate as Sen. Warren threatening Amazon with break-up for “heckling Senators with snotty tweets.”
To a well and widely read outside observer it surely looks like the American political class, on both sides of the aisle, has lost it — and it is no consolation that one can say the same thing of several other countries as well, including my own.
I do not permit comments on this blog. The reason for this and further information can be found on the page Privacy Policy.