Later this year we (Wolf & Geraldine Paul) will be moving from Vienna to our new home in Gross-Schweinbarth in the “Weinviertel” region of Lower Austria, about 30 km northeast of Vienna. Here is a map which shows the area: 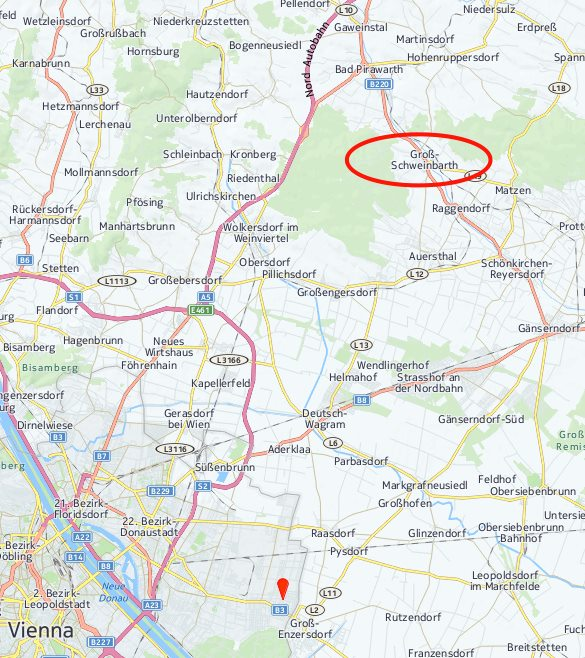 Map showing location of Gross-Schweinbarth in relation to Vienna

Here you can see a red marker near the bottom of the map, on the outskirts of Vienna, where we have lived for the past twenty plus years, not very far from where I (Wolf) grew up. In the top right quarter, circled in red, you can see Groß-Schweinbarth (Gross-Schweinbarth is an acceptable spelling if you are not familiar with the German letter ß; please don’t use a B or write sz). The village (actually, legally a “market town”, but that’s almost too grand a designation) is situated in a gap between two hills, Hochleiten Wald to the West and Matzner Hügel to the East.

We are actually pretty familiar with the area; for many years my brother lived and ran a grocery store in Raggendorf, the next village south along the B220 road, and further along that road is Gänserndorf where I spent a lot of time as a child because my father ran a Sauna there.

Due north of Groß-Schweinbarth, almost off this map, is the village of Niedersulz, home to an open air museum which also houses the Täufermuseum or Anabaptist Museum. After the Reformation, an Anabaptist group, the Hutterites, settled for a while just north of here after fleeing persecution in the Tyrol.